SCANDINAVIAN HUMAN RIGHTS LAWYERS has over the years published a number of reports within the framework of EU-projects where we have been Swedish experts. In addition, we have published reports on certain subject areas. We are often involved in the public debate on human rights, and the reports are a complement to the conversations in which we are involved. 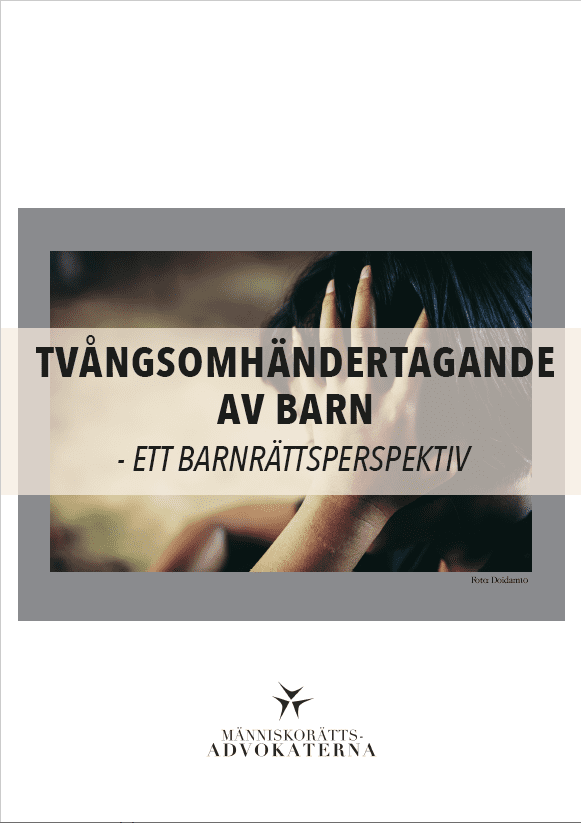 In 2020, the Convention on the Rights of the Child became Swedish law. Are the children's rights met in practice when it comes to LVU cases where children are forcibly taken into custody? In the balance between the different interests, assessments can be difficult and situations sensitive. With the background of criticism brought forward by the UN Committee on the Rights of the Child, this report investigates how children's rights are met within the framework of LVU cases. In-depth interviews with professional lawyers have been conducted together with a thematic analysis of 48 legal cases in administrative courts and courts of appeal in Sweden.

In recent years, this subject has gained attention and is still discussed in various contexts. The "Lilla Hjärtat" case touched, and stirred up emotions, which led to changes in the law (lex Lilla Hjärtat). The Parliamentary Ombudsmen for Justice has investigated how the Social Service handles cases of restriction of access according to the LVU, and criticizes the Social Service for not sufficiently considering the child's best interests and the child's participation. Furthermore, LVU has become the subject of discussions in political contexts where, for example, the Nyans party talks about "LVU abuse" and the Moderaterna describes LVU as a tool for combating gang crime. In addition, there have been reports of disinformation campaigns against Social Services.

Based on criticism from the UN Committee on the Rights of the Child, the report aims to examine the rights of children and parents in the event of compulsory detention according to the LVU.

The full report in Swedish is available here. 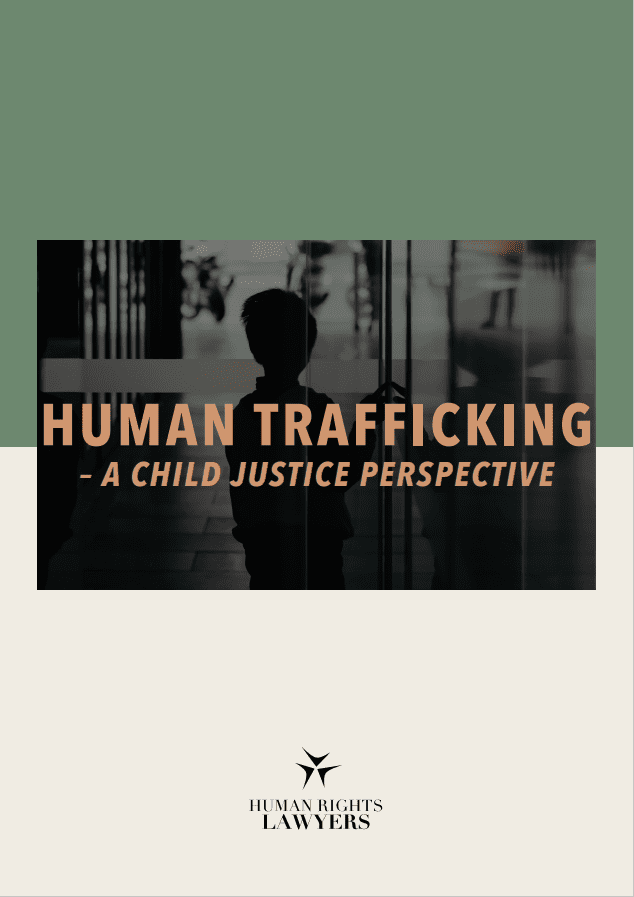 March 2022
Human trafficking is a violation of human rights and a violation of human dignity and integrity. The UN agency UNICEF estimates that as many as 1.2 million children are trafficked every year. According to the European Commission, traveling and unaccompanied asylum-seeking children are considered to be at a great risk of being exposed to trafficking and exploitation in Sweden. Between 2013–2016, there were indications that more than 1,500 unaccompanied children had disappeared in Sweden and that most were probably children from countries of origin such as Afghanistan, Syria and Iraq. According to the 2018 Gender Equality Agency’s report on children in human trafficking, it was reveled that 57 of 262 reported human trafficking cases were children and that 18 were accompanying children to asylum-seeking adults. According to the European Commission, however, it is likely that human trafficking in children in Sweden is greater than the statistics show because many potential victims do not come to the attention of the authorities at all. Since the COVID-19 pandemic, the UN agency UNODC has drawn attention to the increased number of victims of human trafficking and the fact that children are increasingly affected.

This report will focus on how legal protection under international conventions, especially the Council of Europe Convention, works in practice in Sweden. Is the Council of Europe Convention followed or does Sweden violate international obligations? In the introductory chapter, a Swedish child rights perspective on child trafficking is presented by the child rights expert, Doctorate (SJD) Harvard Law School and Professor of Law at Leeds Law School, Maria Grahn Farley. The following chapter presents the results of in-depth interviews with representatives of authorities, civil society, sheltered housing and other actors working against human trafficking. This qualitative survey provides an insight into how well Sweden maintains the Council of Europe Convention against human trafficking, with a special focus on children’s rights.

The full report in Swedish is available here. 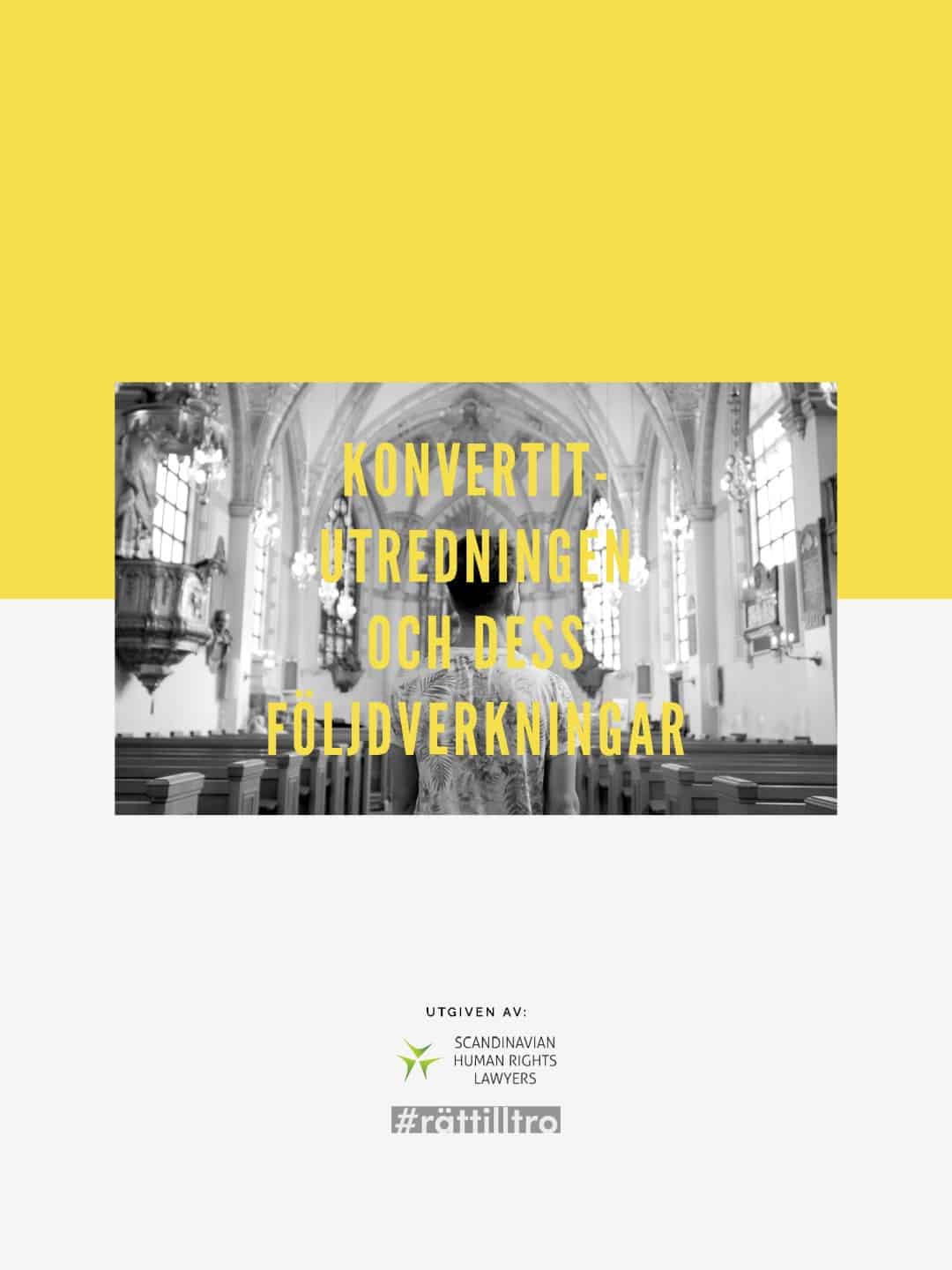 Inquiry into the asylum processes of religious converts in Sweden 2.0

April 10, 2021
In the Convertivity Inquiry, which was presented in March 2019, the Swedish
Migration Agency's handling of Christian converts' asylum processes was analyzed
and the rapport found major shortcomings regarding legal certainty. The Convertite
Inquiry was based on 619 asylum-seeking men and women from Afghanistan who
came to Sweden between 2015 and December 2018, have converted to the Christian faith and are baptized members of one of 76 Free Church congregations in 64 locations.

It is a fundamental human right to convert, that is, to change religion and have the
opportunity to manifest one's faith openly and visibly. It is also a human right to have
a legally secure and objective examination of one's grounds for asylum. But how can
one judge whether someone is a Christian or not? 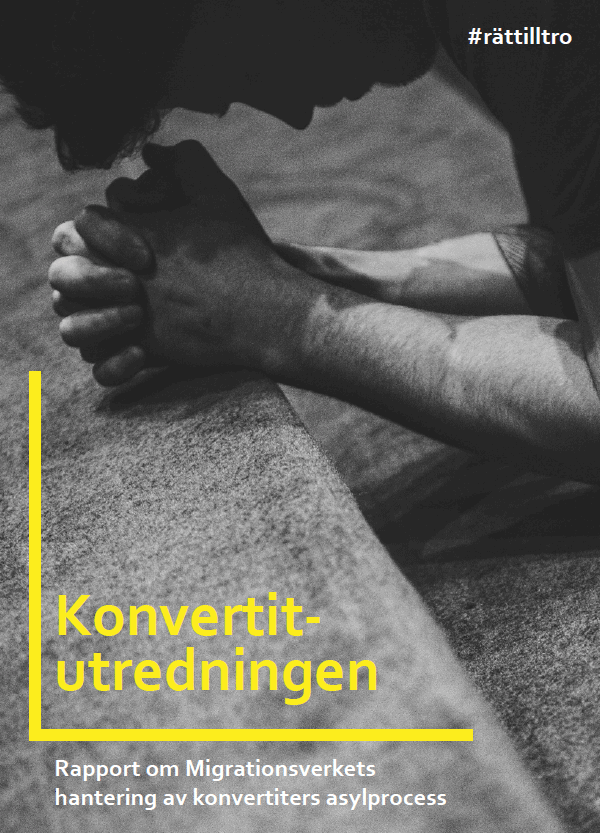 Inquiry into the asylum processes of religious converts in Sweden

March 2019
The Inquiry Into the Asylum Processes of Religous Converts in Sweden is a research report with the aim of obtaining statistics on how converts’ Christian faith is assessed in the asylum process. In a w15. This was especially true of asylum seekers from Afghan roots. Within this group, a relatively large number have converted to the Christian faith. This has shed light on issues related to faith, religion and conversion in relation to the asylum process.

Scandinavian human rights lawyers were responsible for the legal portion of the text. Our findings showed that the right to conversion, the act of changing one’s religion, and having a legally secure and objective examination of their grounds for asylum are both fundamental human right. Our analysis showed that the Swedish Migration Agency’s decisions were often in conflict with Swedish law, international law and human rights. The European Court of Justice, the UNCHR guidelines and the UN Committee against Torture provide the necessary guidance regarding the application of international conventions in this area, and our analysis revealed the systematic shortcomings at the Swedish Migration Board in their assessments. All in all, the investigation’s conclusion was that the Swedish Migration Agency’s decisions in the converted cases examined were arbitrary and legally insecure.

A summary of the report is available in Enlgish by clicking the link down below. The full report, however, is wrtitten in Swedish and is available here.

Download Inquiry into the Asylum Processes of Religious Converts in Sweden 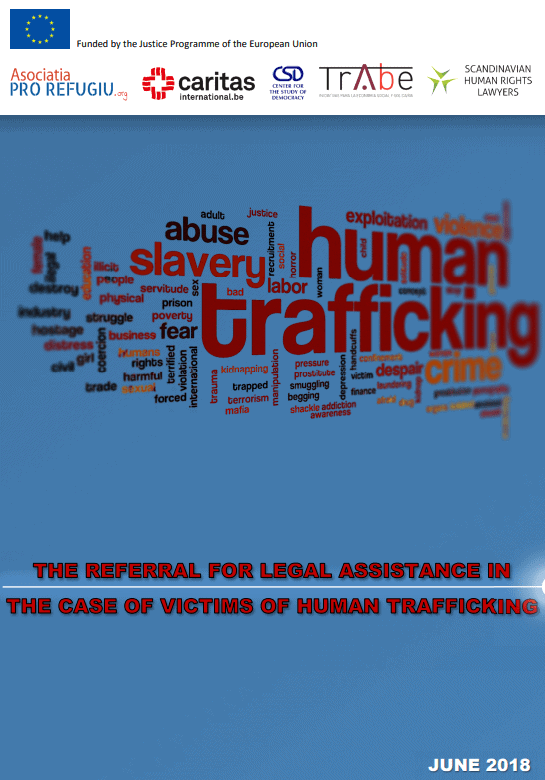 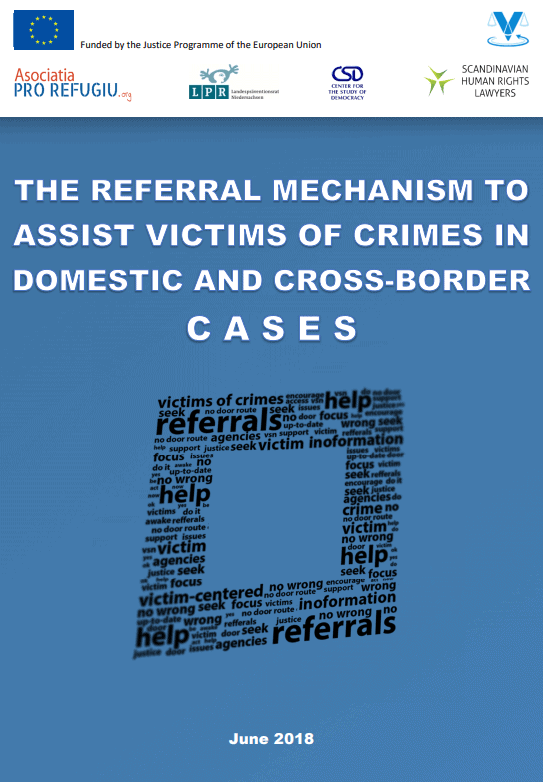 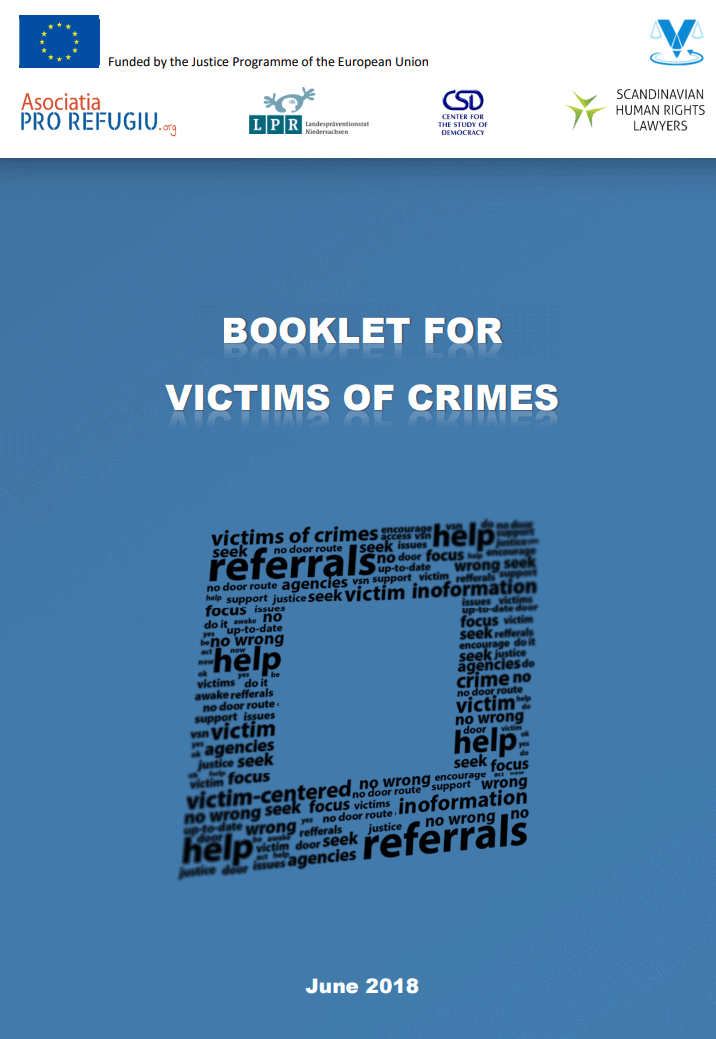 Booklet for victims of crimes 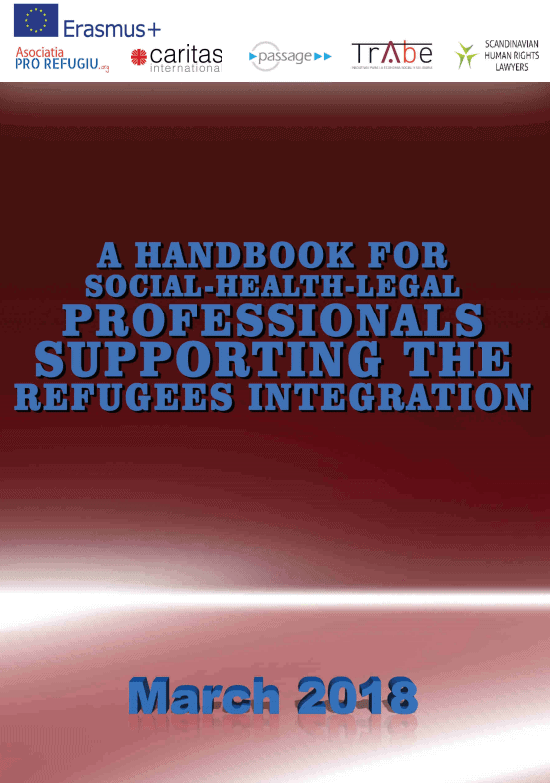 A handbook for social-health-legal professionals supporting the refugees integration

March 2018
The focus of this handbook is on the health, social, legal and professional integration of refugees, and this handbook contributes to questioning the existing methods in different areas. It aims to encourage discussion and reflection. Based on an analysis of the situation, living conditions and various parameters in five European countries (Romania, Belgium, Germany, Spain and Sweden), as well as on practical experience, it presents examples, concepts, success factors and obstacles in order to help readers in their own reflections, and thereby enrich activities in several different fields of activity. The diversity of examples and illustrations, given the details of each context, contributes to an international perspective and activities in a wide range of different fields within activities with refugees. 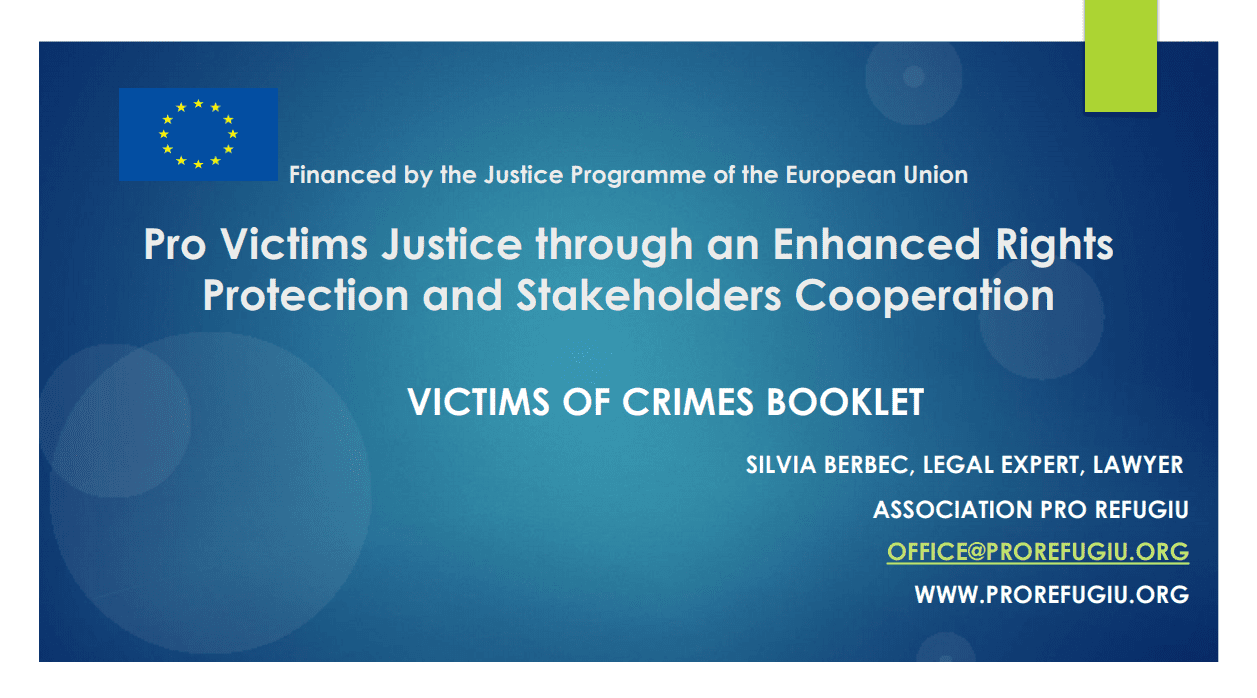 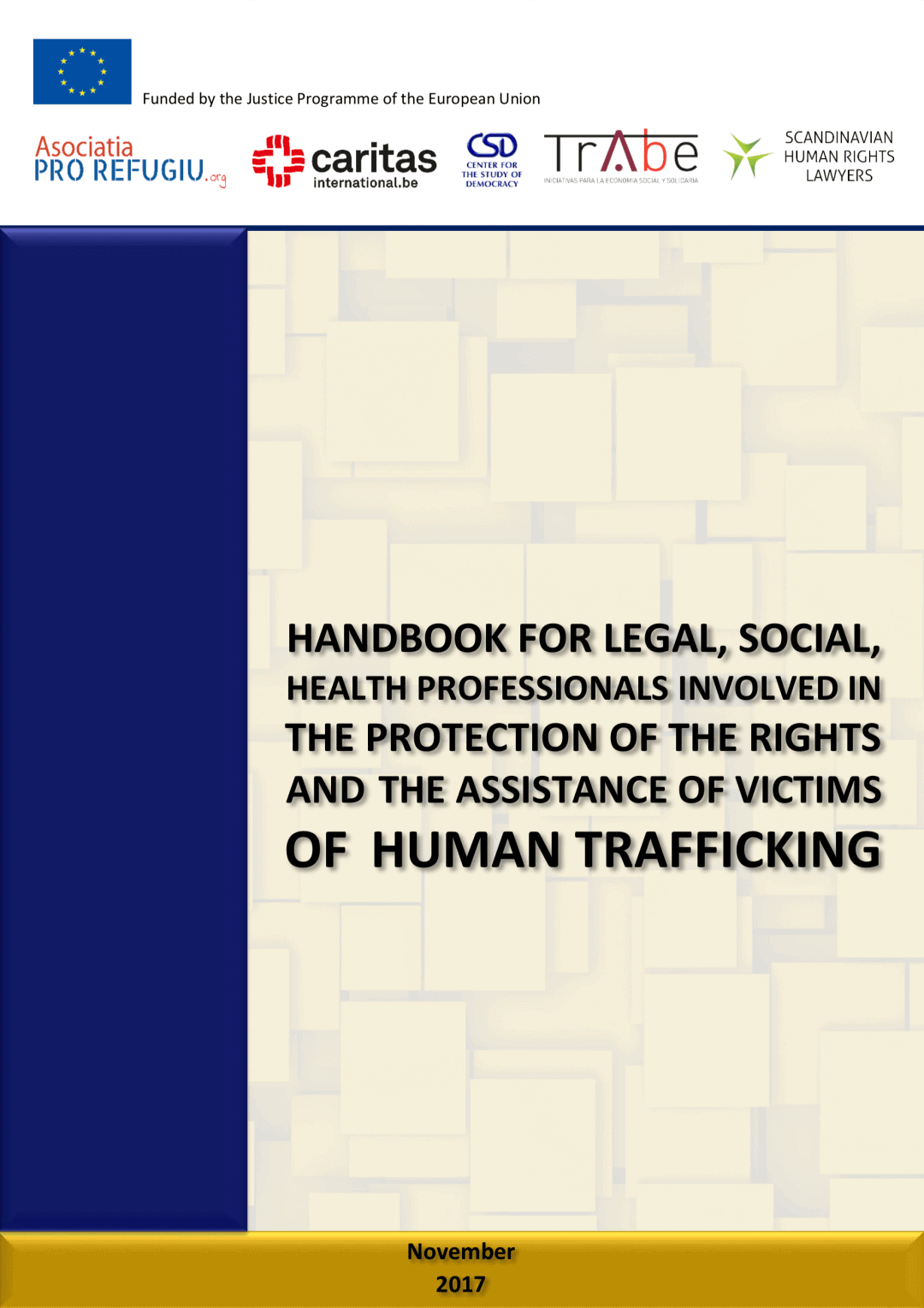 Handbook for legal, social health professional involved in the protextion of the rights and the assistance of victims of human trafficking

November 2017
This handbook addresses the legal framework for protecting and supporting victims of human trafficking, the process of secondary victimization through the criminal justice system, the role of psychologists and social workers in the criminal process and the interdisciplinary work in dealing with human trafficking cases.

The handbook contains four parts: 1) EU and national regulatory frameworks; 2) avoidance of secondary victimization during legal proceedings; 3) the role of psychologists and social workers in legal proceedings; and 4) the need for an interdisciplinary team to provide adequate support to victims.

This handbook was developed as part of the “Strengthening multidisciplinary cooperation to ensure effective referral, assistance, rights protection for victims of human trafficking” project and was funded by the European Commission, Justice Program. The project was coordinated by Association Pro Refugiu Romania in collaboration with Caritas International Belgium, Center for the Study of Democracy Bulgaria, Association Trabe Iniciativas para la Economia Social y Solidaria Spain and Scandinavian Human Rights Lawyers.

Download HANDBOOK FOR LEGAL, SOCIAL, HEALTH PROFESSIONALS INVOLVED IN THE PROTECTION OF THE RIGHTS AND THE ASSISTANCE OF VICTIMS OF HUMAN TRAFFICKING 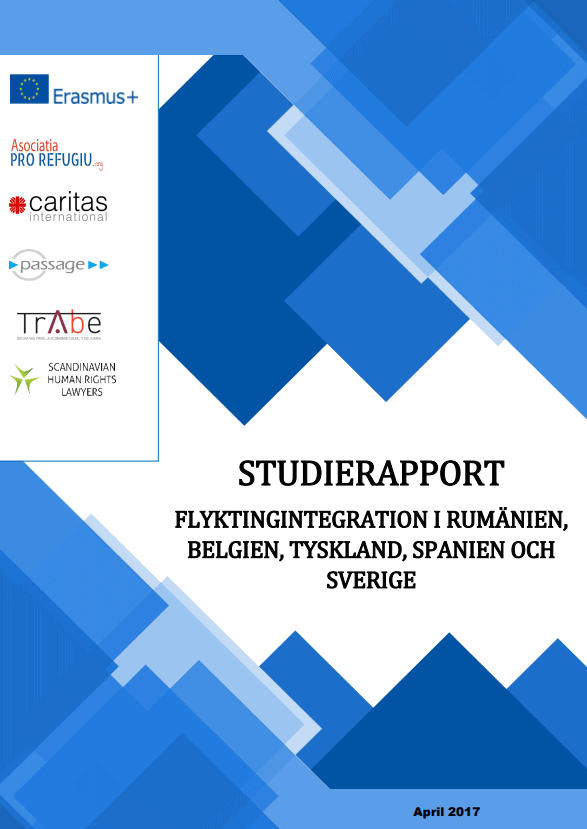 Study report: The integration of refugees in Romania, Belgiom, German, Spain and Sweden

April 2017
The number of people seeking refugee status in Europe has increased significantly in recent years. The refugees live year after year with little hope of ever returning home: some because their countries are involved in endless conflicts, others because they fear persecution if they return. For the majority of refugees in Europe, integration is the most sustainable solution, but it is a complex and gradual process with legal, economic, social and cultural dimensions. Integration places great demands on both the individual and the host society.

The purpose of the study is to highlight existing projects and gaps and develop a set of recommendations that can support future strategies regarding integration policy and projects. The study was prepared as part of the transnational project, “Enhance professionals ‘knowledge for a sustainable refugees’ integration”, and was funded by the Erasmus Program Strategic Partnerships, VET Action. The project is coordinated by the Romanian organization Association Pro Refugiu in collaboration with Caritas International Belgium, Passage gGmbH Germany, the Scandinavian Human Rights Lawyers in Sweden and Trabe Iniciativas para la Economia Social y Solidaria Spain. 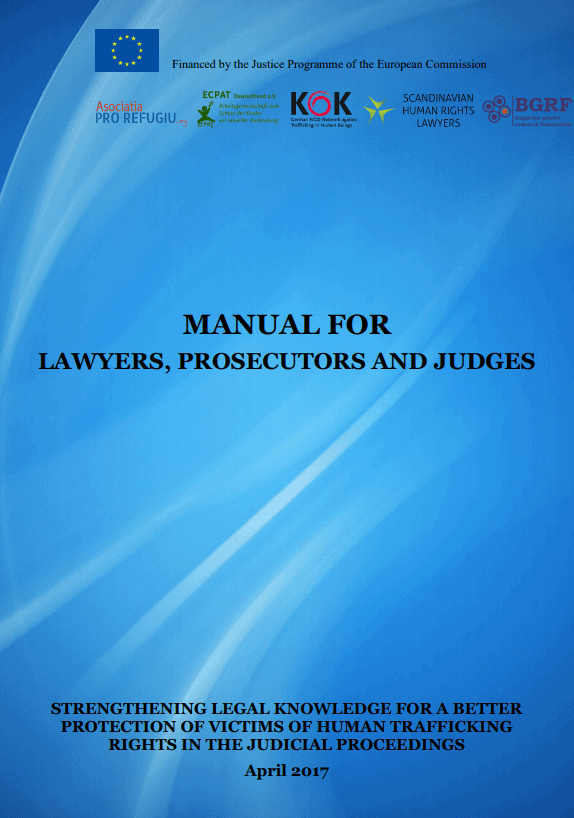 Manual for lawyers, prosecutors and judges 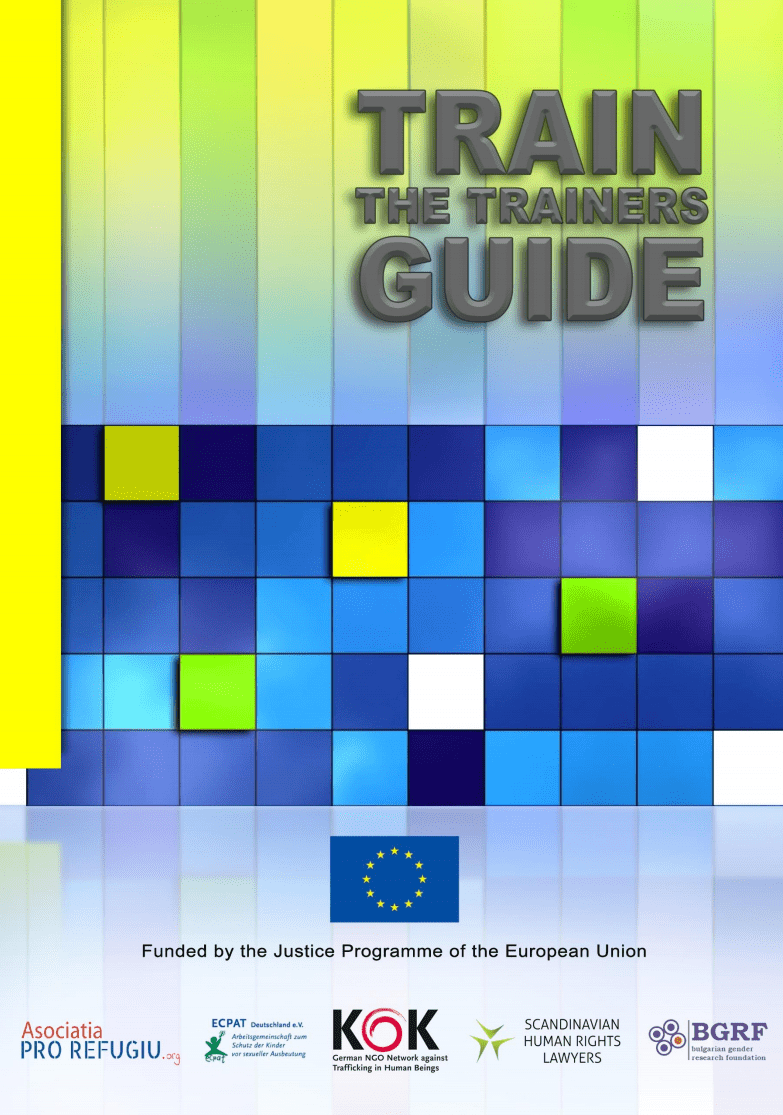 December 2016
Trafficking in human beings (THB) and esp. trafficking of children are complex, not easy to investigate and to identify victims and a challenge to consider the well-being of the victims. At the same time it is a growing global crime with a lot of profit for the traffickers and new forms are being developed.

The following guide developed by ECPAT Germany serves as a basis for educating involved lawyers and law enforcement in general about the issue and training them about the specific challenges that a process with victims of trafficking in human beings entails. The guide was developed as part of the project Strengthening lawyers legal knowledge and cooperation with prosecutors and judges, to protect victims of human trafficking rights in the judicial proceedings, a project coordinated by the Romanian organization Association Pro Refugiu in partnership with ECPAT Germany, KOK – German NGO network against trafficking in human beings, Bulgarian Gender Research Foundation and Scandinavian Human Rights Lawyers Sweden. The guide has been written in order to assist people who are providing training to legal professionals on the topic of trafficking and exploitation of human beings.