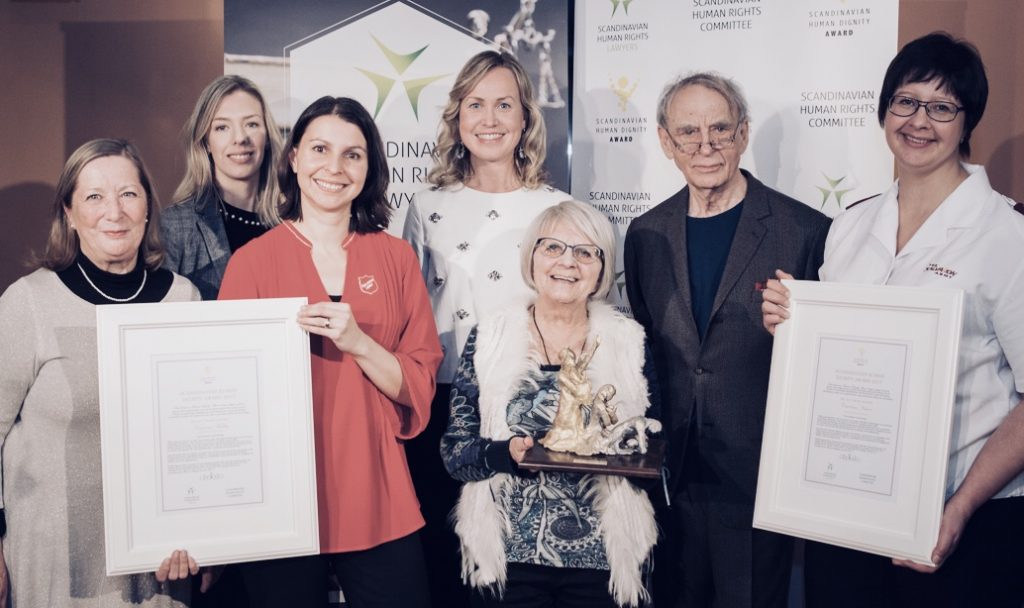 Members of the Scandinavian Human Rights Committee together with the award winners. Photographer: Johan Rudén

- In recent years, Scandinavian Human Rights Lawyers have collaborated with the shelters of the Salvation Army and closely monitored how the practical relief efforts contribute to the protection, support and restoration of some of the society's most vulnerable. The Salvation Army also works with preventive efforts by spreading information and raising awareness about the issue and has developed a very good educational material. They also conduct outreach activities, which is very important, as many victims of trafficking do not dare to report the crimes they have been exposed to, the police. We are very pleased about the cooperation with the Salvation Army and to be able to award the managers of the shelters for victims of human trafficking with the Scandinavian Human Dignity Award 2017, said Ruth Nordström, Senior Legal Counsel and Chairman of the Scandinavian Human Rights Committee.

- The Salvation Army comes into contact with human trafficking daily through its extensive social work and through a national support program, the vulnerable victims of trafficking and violence and their families are accommodated in housing. Trafficking in human beings is the slavery of our time and constitute serious violations of a number of human rights, where women and children are particularly vulnerable victims. The Salvation Army's efforts to protect vulnerable victims of trafficking in human beings and to strengthen their hope and belief in the future, give them confidence and promote their rights and freedoms, are highly honorable, said Rebecca Ahlstrand, lawyer and member of the Scandinavian Human Rights Committee.

-In my work to help the prostitutes on Malmskillnadsgatan, I meet the vulnerable of society, and I have been exposed to sexual abuse and sold to prostitution myself. When I received the prize in 2013, I was deeply moved to see the statue, which showed a broken man who rises to his full human dignity. I felt it was my life that was symbolized. The Salvation Army's work, which is unique, is based on the value of all human beings. The Scandinavian Human Dignity Award symbolizes their work to give people an established human worth, said Elise Lindqvist, member of the Scandinavian Human Rights Committée.

In 2013, Elise Lindqvist, the “Angel in Malmskillnadsgatan” (the prostitution street of Stockholm) received award. Year 2014, the prize ceremony was held in the European Parliament in Brussels and awarded to the Council of Europe's Trafficking Report, José Mendes Bota, at a seminar about trafficking and the Swedish sex purchase law. The Scandinavian Human Dignity Award 2015 was awarded Lars Adaktusson at a parliamentary seminar with the theme: "There is a genocide in the Middle East - What are we doing about it?" 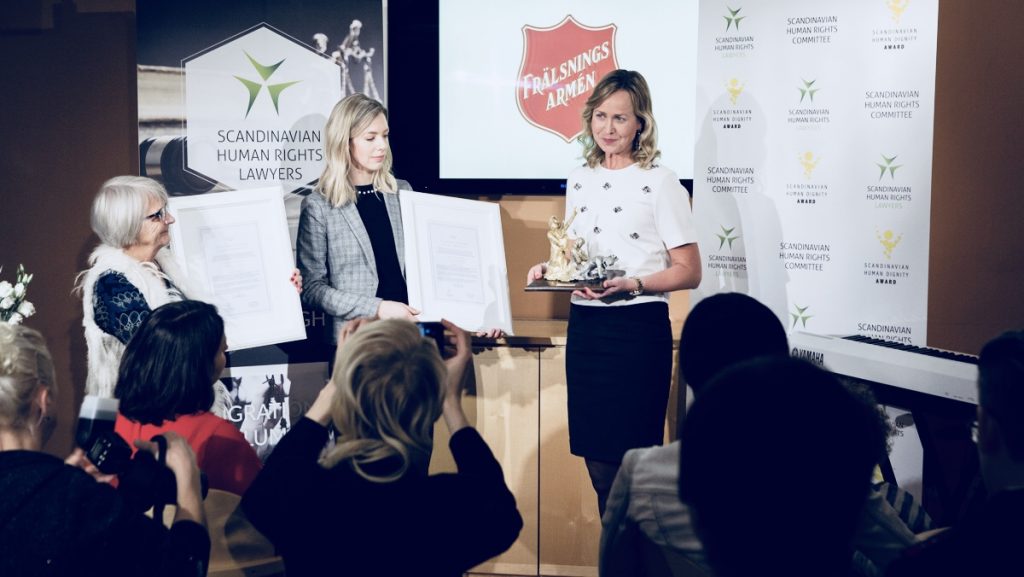