The international award  SCANDINAVIAN HUMAN DIGNITY AWARD is awarded annually to a person or an organization which has made a special
contribution to human rights, all of which derive from the inherent dignity of the human person and are essential for his free and full development

We are very pleased to be able to award the Scandinavian Human Dignity Award 2021 to Maria Grahn Farley for her efforts for children’s rights. When the UN Convention on the Rights of the Child became Swedish law on 1 January 2020, it was an important step in strengthening children’s rights. Maria has for many years made an outstanding contribution in this area, not the least through her important legal commentary on the Convention on the Rights of the Child. We have had the privilege of collaborating with Maria on seminars and a report on human trafficking with a focus on children’s rights. Maria is truly a worthy winner of the Scandinavian Human Dignity Award.

See the article published by Leeds Beckett University on Maria Grahn Farley as the winner of the prize.

The prize has been given to person or an organization which has made a special contribution to human rights  since its establisment in 2011.

Throughout the years a few notable recipients have received the award. In 2013, Elise Lindqvist, the “Angel on Malmskillnadsgatan” was awarded the prize to honor her efforts to combat the commercial sexual exploitation of women in Sweden. In 2014 the prize was awarded in the European Parliament in Brussels to the Council of Europe’s rapporteur on trafficking, José Mendes Bota, at a seminar on trafficking and the Swedish Sex Purchase Act. The Scandinavian Human Dignity Award 2015 was presented to Lars Adaktusson at a parliamentary seminar with the theme: “There is a genocide going on in the Middle East – What are we doing?” The 2016 winner of the Scandinavian Human Dignity Award was Dr. Denis Mukwege, chief physician at Panzi Hospital in eastern DR Congo, where tens of thousands of women and children who have been subjected to sexual violence have received care. Dr. Mukwege has been awarded the Nobel Peace Prize and is world-renowned for his work for raped women and has challenged both the UN and the international community and become a spokesperson for the victims of the war in Congo. In 2017 the prize was awarded to the Swedish Salvation Army for their work and activities and sheltered housing for victims of human trafficking and in 2018 the organization International Justice Mission (IJM) received the prize for its work in combating human trafficking and promoting human rights globally. In 2019 Maria Gustin Bergström received the prize for her efforts. the initiator of the Converted Inquiry, a survey and report that includes 619 Afghan citizens who converted to Christianity and sought asylum in Sweden 2015-2018.

We are very pleased to be able to present the Scandinavian Human Dignity Award 2020 human rights award to Bryan Stevenson and the organization Equal Justice Initiative (EJI)
for theirenormous efforts to promote justice, human rights and human dignity. Bryan Stevenson is a true pioneer and his commitment to instill hope in the seemingly “hopeless” cases and to promote human dignity and human rights for vulnerable people sentenced to death is highly commendable. Bryan Stevenson and EJI have made a huge effort in their fight for the unjustly convicted and in their work they give a voice to those who can not raise their own voice. Bryan’s value – based work and his fight against systemic injustice and his bold stance for justice, truth and mercy are a great inspiration for us in our fight for human rights and justice in Scandinavia and Europe.

I am extremely honored to receive the Scandinavian Human Dignity Award, I have had the privilege of spending time with the previous winner of the award, Dr Denis Mukwege, and I know his remarkable work in Africa and being in the company of people who have done such extraordinary things. is deeply meaningful and very humbling. I am part of a tradition of people who carry the conviction that our faith must be made real in what we do and expressed in people’s lives whose humanity and human value are not recognized. I receive the award not only as a confirmation of what I do, but as a confirmation of the people I serve. I receive the award for the damned who are awaiting execution around the world, for those who are told that their lives have no meaning or purpose or value so they are imprisoned forever, for the children who had their childhood removed because they were considered adults even though they are 13 or 14, for the women who have been told that their fight against violence and abuse is irrelevant when they fall down, respond or react, and for the poor who often feel that they are less valuable and less important. It is in these societies and in this context that my life and my work are important and it is this kind of recognition that makes that work even more remarkable, so I am grateful to the organization and network of lawyers, lawyers and activists around Scandinavia and Europe, which thought it valuable to acknowledge our work in America with the EJI, I am very honored. 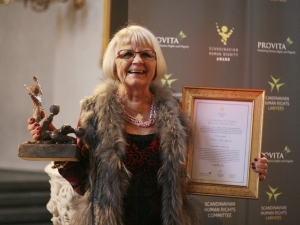 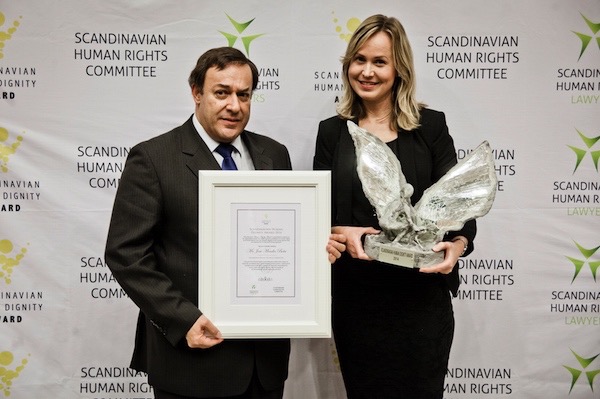 MEMBERS OF THE COMMITTEE

Reinhold Fahlbeck – Professor emeritus in Labor Law at the Department of Law at Lund Univesity.

Kjell O Lejon – Phil. Dr. and Theol. Dr., Professor of Theology and Religious Studies at Linköping University. Prior to his doctoral studies in church history at Lund University, Leijon became a PhD in religious studies at the University of California.

Marianne Lidskog – Former official at the Ministry for Foreign Affairs and now actively active in the diaconate in St. Clara Church in Stockholm.

Elise Lindqvist – Responsible for the Ore Difference Team, author and an esteemed speaker. For 20 years, Elise Lindqvist, based on the diaconal work in St. Clara’s Church in Stockholm, has worked on Malmskillnadsgatan in Stockholm to help women in street prostitution. Her long-term goal is to instill hope in the women who walk the streets and help them out of prostitution and human trafficking. Elise Lindqvist’s life story is portrayed in her autobiography, “The Angel on Malmskillnadsgatan”, written in collaboration with Antima Linjer. Elise Lindqvist received the Scandinavian Human Dignity Award 2013.